Let me open with an apology, things have been quite mental over the past few weeks and my time for modelling and painting has been limited at best. This doesn't mean I have not taken the chance when it's been presented to work on a few bits and bobs. First up is my very first attempts at using modelling putty or greenstuff. The Dark Reaper exarch was a second hand job from ebay where the previous owner had decided to remove the front detailing on the chest for whatever reason. the original model had the straps crossing over with a skull on top however as this was my first attempt at modelling ever I opted for the more straightforward approach of just doing the straps. once this is undercoated i'm hoping you wont even be able to tell that the straps were not there all along. :D 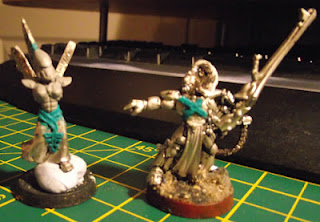 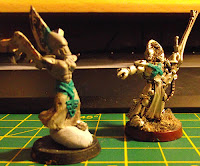 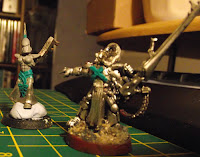 Alongside this you have the beginnings of my female farseer model. a lot of work still needs doing to her including the addition of a long coat, detailing on the head 'fin' and some other eldar type bit's. 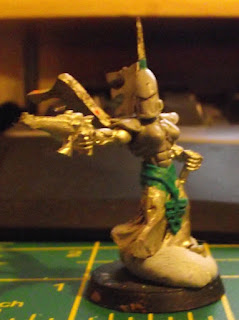 In these two photo's you can see i've pinned the head and the arms into place to give a better idea of how she will be posed, as you can see she's still missing her sword in the left hand. More to follow on this little project. 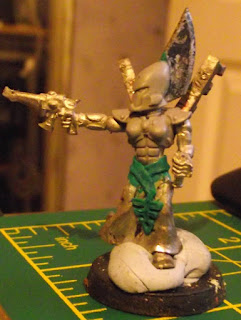 Next up, my friend has given me some of his chaos marines to work on, these have mostly been glued and undercoated and he wants them in thousand sons colours so i've started on one of the models, base coated and highlighted the blue areas and started on the gold trim. only about a third of the way through and i'm pretty chuffed with the results so far. He's also going to be letting me have a go at painting his defiler so I have plenty to be keeping me going.... 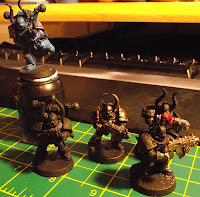 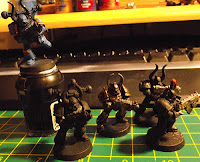 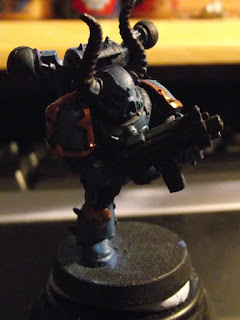 Did I mention that i've also picked up the limited edition dark vengeance boxed set as well as ordering a load of  terrain oriented bits which i'll make into a video and post on youtube when i'm done, ordered a set of 72 Vallejo paints oh and this arrived in the post today: 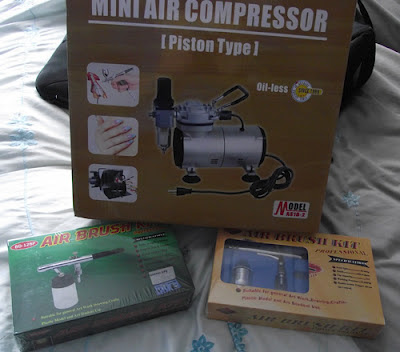 So yeah, plenty to be keeping me busy, now just to find the time to actually sit down and get through it all!!!!
Posted by Unknown at 23:42 No comments: