Thanks for stopping by!!

A lot of people talk about how they find painting boring, or tedious or simply they don't enjoy it. Some people enjoy painting and collecting more than gaming with their miniatures for me I like to dabble in all aspects of the hobby, I enjoy collecting, painting, gaming and creating supplementary aspects to the hobby such as gaming terrain etc.

While sure you can play games with proxies models, or even just assembled models without paint on them I think that by not painting your models your missing out on an aspect of the hobby that can be enjoyable. I used to hate painting, never could find a way to not be doing something else other than painting and as such I've amassed a large collection of mini's that are still in their boxes, but I'm slowly working through them. The trick to painting if you don't enjoy it is to break down what in particular is it that you don't enjoy about it? Is it that it can be time consuming, or you just think your not good enough at painting to warrant spending the time doing it. I guess everyone will have their own reasons for why they put it off or just don't bother with it, everyone's reasons i'm sure are valid to some extent.

As I said I used to be one of those guys who actually detested painting, I didn't think I was good enough and the whole process in truth I found a bit tedious. What changed? It was a slow change at first but the first step in changing my mindset towards painting was actually joining a community, in my case it was +Fritz 40K 's warmaster forums. I got chatting to one of the guys on the forum about how much I had to do and how I could never find the time or the will to do them. The guy turned around to me and said "do me a favour, go get a glass of water, a paper towel and pick up your paint brush." there's more to the story but i'll focus on this element to begin with. I laughed it off initially and said maybe later or something along those lines but upon reflection this was probably on a subconscious level where I first realised that I was the reason that my models were sitting there crying out for some attention. All of the excuses I was making to myself were obstacles I was putting in the way to avoid doing something that I didn't enjoy.

Later on in the discussion the guy pointed me in the direction of a motivational paint thread on the forum and also made a bet with me, I would paint 5 models (in this case chaos terminators) in 7 days, he would over the same duration paint some of his to do list ( I think it was 20 daemonette's he was part way through painting and a Demon Prince), however he added an extra element to the bet in that if I met the deadline he would also paint up a unit of something else over the course of 2 days. He'd upped the anti so I felt obligated to add my own sweetener to the deal and added a unit of dire avengers to the bet with a new deadline. This might seem convoluted but by having a bit of fun or an ongoing bet with a friend over something you both agree to that gives you an excuse to do something rather than put it off.

One of the big things I did to help speed up and remove one of my other excuses was to buy an airbrush, i now use this to prime my models, undercoat them, 2 stage highlight them and when trying to use stencils etc and honestly it's one of the best investments i've made. I save money on not buying spray primer because the airbrush does it better anyway, it allows me to put layers of detail on the model simply by spraying it removing the need to learn how to layer with my brush and those large areas of space on your tanks that used to take hours with a normal brush and ended up with brush strokes etc are now done in minutes with a very even coat which just makes it look better. Airbrushes are expensive!!! Well I used to think this too, but actually you pick pick one up relatively cheaply (for the same cost as a riptide or  stormraven gunship!)

The point of this was that sure painting wasn't fun but by turning it into something else I had to get the models done, and I did but this led me to another realisation. Painting while still being dull and somewhat tedious I could make it interesting by finding the right motivation, and you know what I kinda enjoy challenging myself, pushing myself to do models in a short space of time in this case but I now have made a bet with myself if you like whereby every time I pick up a new model / unit to paint I find a way to add in something new each time, be it learning a new technique or learning how to use a stencil just something to challenge myself with.

I also find something distracting to put on in the background to distract myself from the passing of time, be it music or a bat rep or just some random videos on youtube.

I'd be interested to hear about your motivations or lack thereof when it comes to painting and what you do to overcome them, if the idea of making a wager with a pal sounds like the right way to get you in the right frame of mind then go for it, if you can't find anyone to make that wager with then head over to the warmaster forums, make an account and drop me a message!

Thanks for stopping by!
Posted by Unknown at 14:59 No comments:

A new collection / labour of love and a bit of a bastion.

Thanks for stopping by!

I've been spending a lot of time recently working on another terrain project and pretty much nothing else. I was inspired by the original card punched terrain sets GW put out when I started in the hobby many many years ago, in particular the Imperial bastion and the imperial firebase. not you can pick these up on ebay 2nd hand and i'm sure you'd derive just as much enjoyment out of them as the end result of my project however being the glutton for punishment I am I decided that no, buying a 2nd hand kit would be far too easy and seeing as I'm trying to challenge myself why not built my own one from scratch.... well some might call me mad, inspired, some weird wobbly line somewhere in the middle of the two however with nothing more than some old necromunda bulkheads,some plasticard, a rough idea of how the bastion looked and plenty of glue, sweat, tears and cuss words later i've arrived at something that closely resembles the original piece. I will touch more on this in another blog post however as being the complete tool that I am I decided that i'd leave the WIP at home and not have it to hand to take awesome show off style pictures of...

So while wallowing in my nostalgia trip to ages past when I had a lot less going on in my life, I was scouring ebay.... never a good thing when you suffer from Magpie syndrome when I stumbled across some old limited edition (read expensive on ebay) models that a friend of mine used to collect (he actually still has his models and wont part with them, believe me I asked!!!) called the praetorian imperial guard. You can read all about these models and why they were created here at the massacre at big toof river.

So I am eagerly awaiting the arrival of the following which i'll strip back to metal and repair where needed. 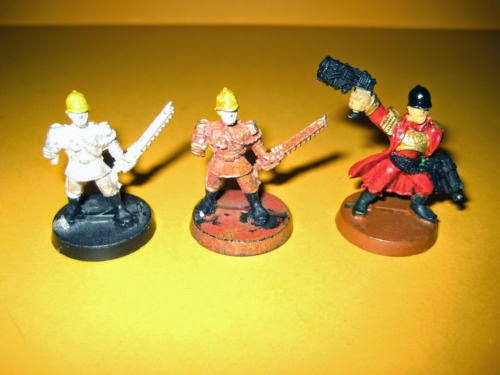 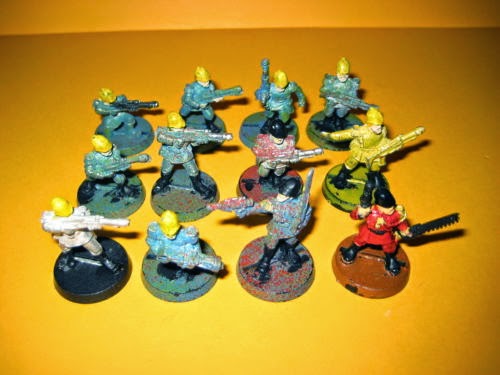 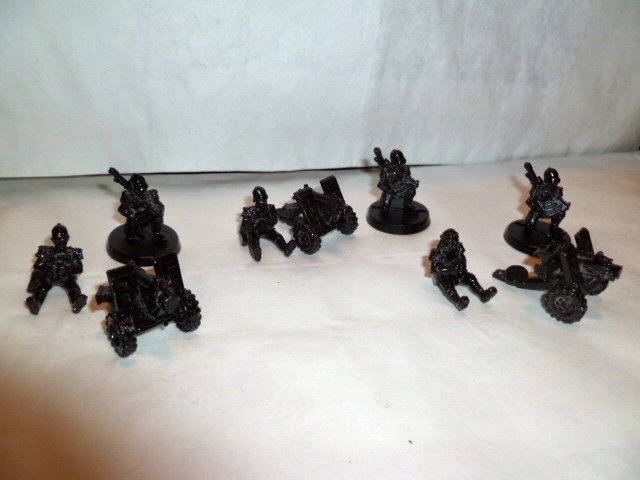 This is enough to get me started I think but is a far cry for where i'll probably need to be for my usual 1k points games, sadly I have no clue how to play guard other than the usual image in my head of a big gun line with tanks supporting but I hear they have some pretty good flyers. If you have any advice on how to go about establishing a decent 1k list then please do drop me a line, offering advice, suggestions, tips or just general comments are appreciated.

Thanks for stopping by!
Posted by Unknown at 11:12 No comments: