So I has MOAR stuff!!

Well the title says it all, i've added the new stuff in brackets!!

I really should get round to working out a rough points value, though this will change with new 6th being release so might hold off for now on that.

So I started painting my 10 man guardian squad + weapon platform as detailed in my last post, they are all sitting waiting on detail work being done. I was in dire need of a HQ and I didnyt want to be limited to just my autarch soooooo I am going to cratch build a female farseer (I dont think GW actually does a female farseer mini), heres the bits i have for her so far. 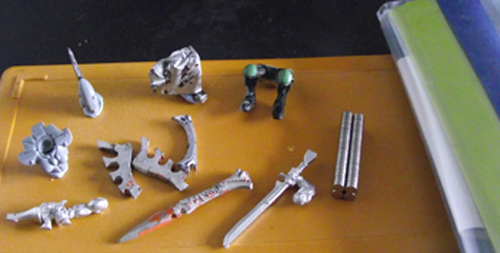 I'll go from left to right;
Top row: a helm that i've glued what I think was some kind of Halberd point onto the back of, i'll put some greenstuff on this and add some spirit stones plus some minor farseer type glyph on the helm, then theres some random legs I got with one of my ebay special buys, no idea what it was originally, but the robs fit in well with the farseer theme, then we have some jetbiker legs (can you tell what my plan is yet?).
Middle row: female guardian torso, i've removed the vents from the standard guardian torso and will make this look a bit more fancy again with more farseer type stuff, then there are the helm decorations from a busted avatar that I picked up, again part of a bundle along with this random curved thing, I think its off a reaper weapon. Magnets!! :)
Bottom row: a dire avenger exarch pistol, the blade from the avatar's sword, dire avenger exarch sword and a load of greenstuff.

So my plan is to magnetise the farseer so that she can be a stand alone mini or be mounted on a jetbike. This will be my first time using greenstuff, magnets and actually my first scratch built eldar project so I will try to keep a step by step 'how I did it' going until she's done. This picture shows the legs / torso, held together with blu - tac atm, next to one of the guardians i'm currently working on purely for a size comparison, the farseer model will work out slightly smaller but this is fitting for the female frame i think. :D 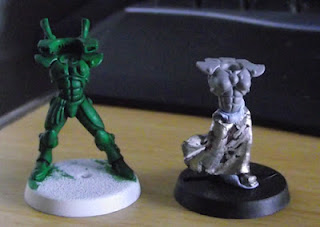 So as promised, here's my list of things that i'll be doing on the blog in the near future, not necessarily in the listed order but these should give you an idea of what to look forward to:

And here's the start of tonight / tomorrows entertainment, 8 guardians undercoated and ready to be painted the same as the finished model. If I have enough time i'll also add the squads heavy weapon platform and gunnery crew too. All of these models were stripped using the technique i'll be sharing with you all in my 'step by step stripping of miniatures: Plastic' guide listed above.

Wow it's been a bit longer than I thought since my last post but thats college done for the summer so a lot of time to focus on this stuff. I've drawn up a 'to do list' of things i'll be getting done and then updating over the next few weeks or so which i'll get up in the next few days.

So anyways, the postman's been and i've got some news bits and bobs, namely my undercoat spray and a few paints that I needed for my colour scheme. I also got a few bits that I picked up cheap from Germany AND my shiney 'almost' new codex.

As I have so many guardians I figured I could do with trying out 2 different variations of the same theme and go ahead and paint the rest with which one I liked best... or even just go ahead with both for some variety if they both come out well.

So I started off by trimming all the moulding lines off both models and then applying my white undercoat. 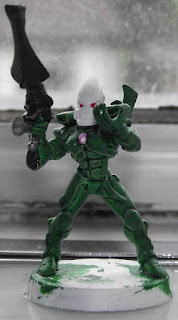 I then basecoated the majority of the model in snot green followed by a Biel-Tan green wash. I then lightly drybrushed a mix of snot green and moot green over this with a line highlight on the edge of the armour plates in moot green. The Gem is a layer of tentacle pink with a stroke of 50/50 pink and white over the lower half followed by a dot of pure white on top to simulate a gemstone. The helm was painted pure white with some blood red in the eyes. The metal's and gun were basecoated black with boltgun metal picking out the detail. You'll notice that I havn't done anything with the base just yet, this is mainly because I've yet to decide what i'll be doing for the whole army base wise so once i've decided on a theme i can then make sure they all tie in together.

You'll have to excuse the pose the model is in, this is a second hand model so my choice was limited. :S

I really like the green scheme so will paint a whole squad up in this, finish off the white guy though I think I might darken him up a bit and then highlight in white to try and get some more definition on it and then put some more pics up.
Posted by Unknown at 17:32 2 comments: